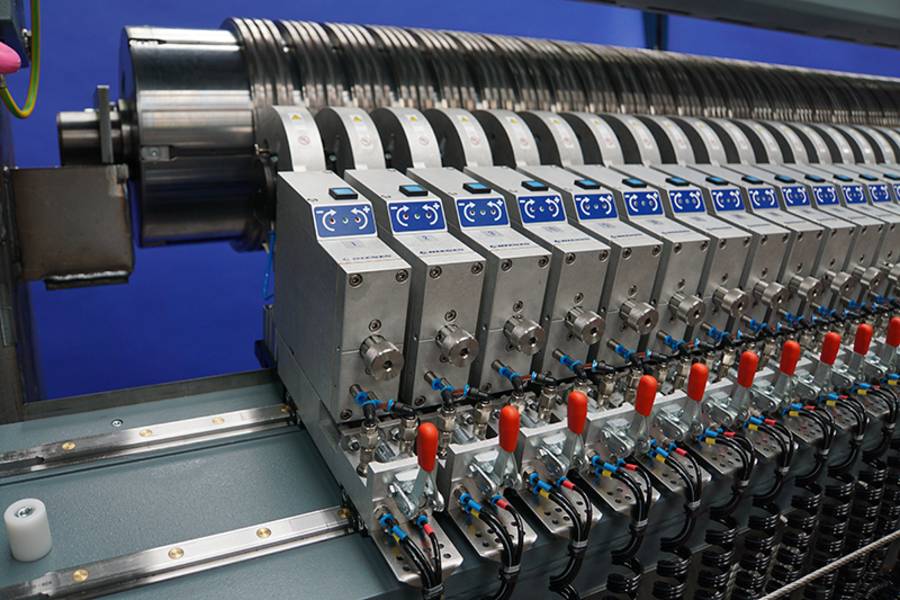 The challenge for DIENES lies in radically reducing the set up times byconverting an old Goebel Roller U16 to an automatic cutting system.The customer's requirements are 61 cuts with a cutting width of 50 mm.In addition, the machine design should remain the same.

As a long-standing customer, C. Macher has known and appreciatedDIENES for many years as an expert and pioneer, especially when itcomes to the holistic modernization of existing cutting systems.DIENES, with around 500 employees, with more than 100 years'experience, has already carried out 1400 successful modernizations. C. Macher has been convinced by the DIENES overall concept basedon experience, comprehensive consulting and ready-to-plug-in systemsfor retrofitting up to assembled cutting systems. The coreboard mill wasenthusiastic about the 61 exactly equal cutting forces thanks to the topknife holder PSGs DF depth control, the easy reproducible knife setting,the 3 times longer service life and the stable cutting results resultingfrom all this. The time-consuming manual adjustment of 61 knifeholders by the operating personnel is no longernecessary. In addition, as if that was not enough, C.Macher does no longer need an additional machine fornarrow cuts thanks to the DIENES knife adjustmentsystem.

Without any concrete work or changes to the machineframe, the Goebel Roller U16 was upgraded to theautomatic DIENES cutting system. The technologyupgrade itself, but also the saving of another machinecontributed to a relatively short armortiziation. Manualadjustment of the cutting width, which used to take up to20 minutes when everything was going well, is nowoutdated.
The sensor for detecting the knife circumference and theresulting reproducible overlap depth, especially for knifeswith different diameters, contribute to consistent cuttingquality and a reduction in setup costs. Individualoperating errors are now eliminated and greater safety isprovided.

Being the most efficient coreboard mill in Europe is nocoincidence. The right machines make the difference -and with an automatic knife adjustment systemequipped with the right knife holders, an increase inproductivity is guaranteed. The project shows thatmutual trust and joint development are the key tosuccess.

"You can easily and quickly check the overlap depthwith the PSGs DF depth control via LED display. Afterthe DIENES fitter instructed our operating personnel,the new technology and the automatic knifeadjustment system was received and implementedwith enthusiasm."